The Spanish capital is the little New York of the Spaniards.  Huge skyscrapers line the horizon as far as the eye can see, with lots of underground lines. It’s a multicultural city with citizens from all over the world, from their “cousins” in South America, to the Italians looking for more fiesta and siesta.

Between the tremendous amount of things to do and see in Madrid, have we selected the top 10 not to be missed attractions that are completely free. 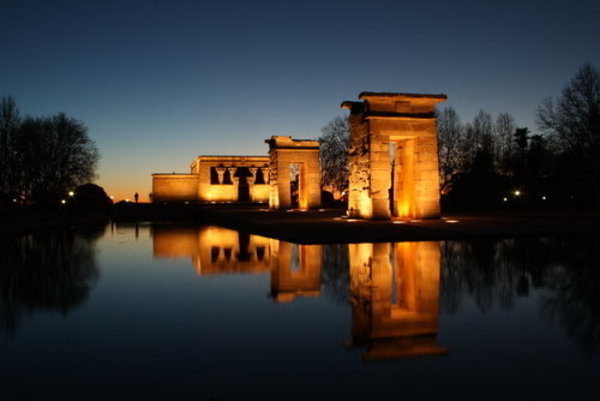 Did you know the Egyptians gave this temple to the Spanish as a gift? And that it is furthermore authentic Egyptian architecture?

The Debod temple is 2,200 years old, is dedicated to the gods Amun and Isis, and was sent piece after piece to the Spanish capital in 1968 by the Egyptian Government.

You can see it for free off course, with the best views recorded during sunset hours in the middle of the Paque del Oeaste.  It is extremely close to the Palacio Real and the Teleferico of Madrid, which is not free, but lets you see the city from the top. 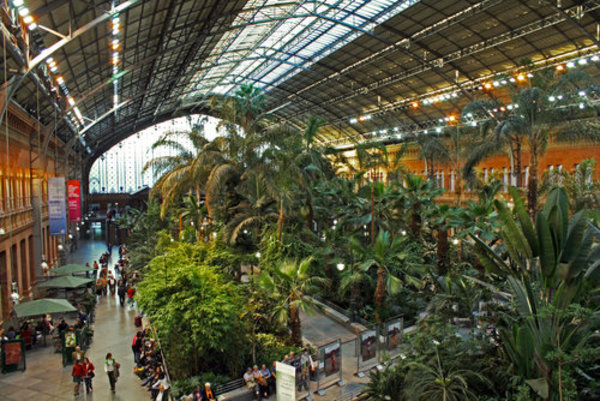 The second attraction is inside an underground station, and it’s not the only one. (See n.4).

Atocha Central Station is although, one of the most important stops for the Underground, and the Renfe. It’s huge and has a tropical garden on the inside, which is a must see.

Travelers Tip:
But do not only go to Atocha to see the garden, even more awe-inspiring is the Le jardin tropical forest.  If you are thus already at Parque Retiro, go to the station and see the forest for yourself.
Le jardin tropical is composed of 7.000 plants with over 400 different types coming from the Americas, Asia and Australia.

3. Museums (yes the Prado too) 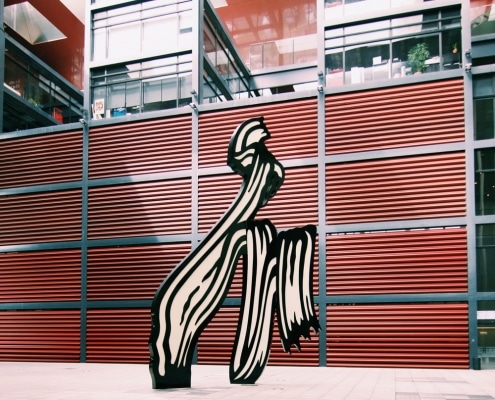 Almost all the Museums in Madrid have at least one day when entry is free.  (The downside is of course the long queues.)

Reina Sofia, very close to The Prado, opens for free on Saturdays and Sunday too.

Travelers Tip:
For both of them you always need to check which days are free, since it is not always the same.

Anden is a free visit not to be missed, but Chamberi Underground Station might be the most interesting and famous since its inauguration date in 1919. It has been closed since the early 1960’s.

The reason for its closure is since two other stops, Iglesia and Bilbao, are very close to it. Chamberi has remained the same, with the old advertising of that time, feeling like you are standing witness to a movie scene being recorded.

5. Crystal Palace inside Parque Retiro (and the lake off course) 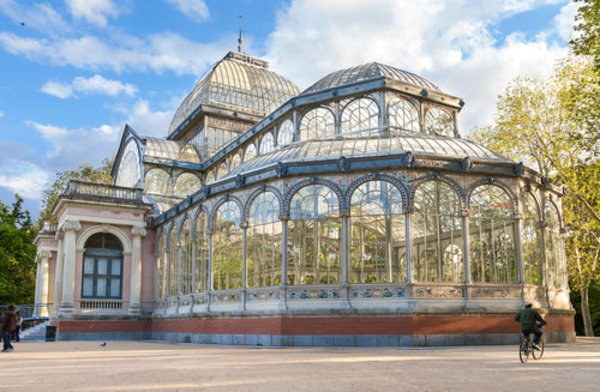 Parque Retiro is huge and you might get lost, but as long as you are able to see the lake and the Palacio de Cristal, you have done a good job. These are not to be missed landmarks at this park, which is not as flat as Hide Park, but luckily has many bars and ice cream vendors.

You will probably meet lots of people with brand new roller blades taking lessons around the fountains, trade farers selling their goods, and/or enjoy some free concerts. 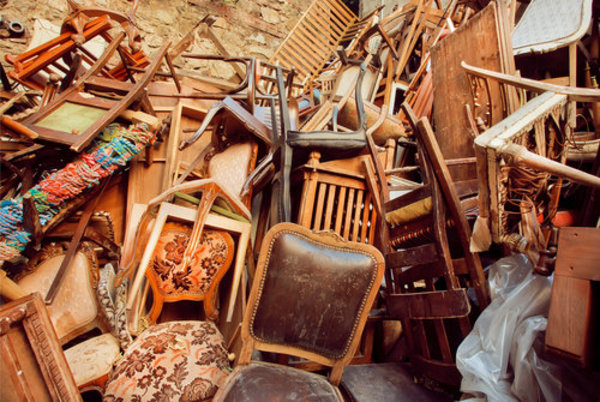 The largest open air, flea market in Madrid is called Rastro. (It is not that far from the centre.) You won’t find anything for free in the 3,500 stalls off course, but the atmosphere inside this 1.0 shopping centre is worth a visit.

It is full of tourists, which might not be considered a typical Madrileño Sunday, but there are a lot of people from Madrid that love doing their shopping at Rastro and consider it better than in Granvia or Puerta del Sol. 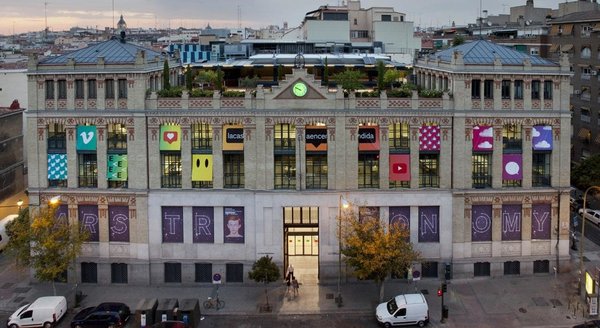 These two locations are thee cultural centres in Madrid.  Every season lots of concerts, shows, movie nights and so on, are on offer. Some of them might also be free with access to the Casa and Centro, which are always free.

Activities can range from workshops for kids, a variety of exhibitions, and showcasing young talented artists on stage.

The Casa Encendida also includes a fair-trade shop, a cafe, library and classrooms for courses, (especially in IT), languages and audiovisual and plastic arts. 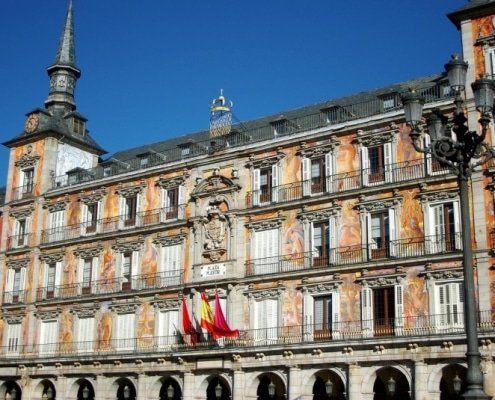 Super close to Puerta the Sol, which with Gran Via, is the touristic art of Madrid where you have to be at least once during your stay in the Spanish capital.  There are Calle Majors’ who leads you to the well known Mercado de San Miguel, between the most famous market in the city, and to the Plaza Major. This rectangular shaped square is huge and tiny at the same time. The walls let you in, but doesn’t show you what is outside.  And the symmetry of the buildings gives you a different perspective. 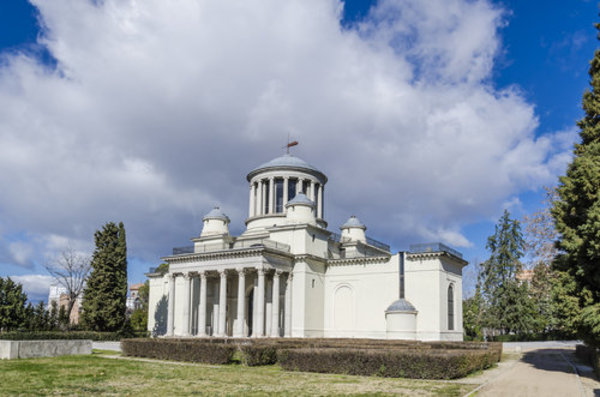 Every city has at least one observatory, which is really a service to all the residents who want to see the sky and stars, admiring their light with professional instruments, for free.

The building in which the Observatory is hosted, is one of the finest neo-classical buildings in Madrid – designed by Juan de Villanueva.

Travelers Tip:
Check the opening hours in advance and book your reservation for the telescope. 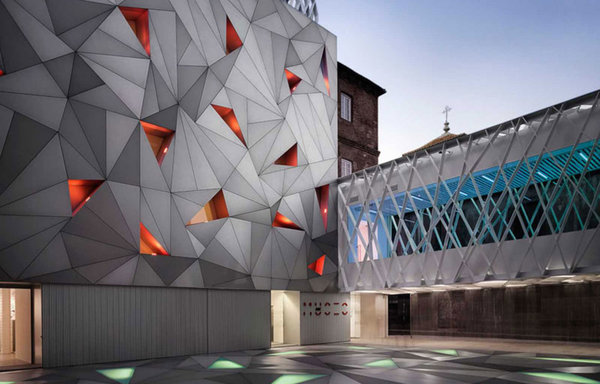 Not one of the most famous museums in the Madrid, and definitely not a museums you’ll find in your Lonely Planet.

The great news is . . . this museum is always free.  Yes, every day of the week and has a collection of illustrations, both in the exhibition and at the library shop, that will make avid collectors lick their lips in anticipation.

The complete name of the museum is the, Museo ABC de Dibujo e Ilustración, directed by the Fundación Colección ABC.  (They own the biggest collection of drawings in Spain.)

ABC is great from the inside and outside, boasting modern architecture on the outside, transformed from an old beer factory.

The Best Food Markets in Madrid
Scroll to top

10 things to do in Madrid for free