How many times your favourite bar or restaurant was so full of people and impossible to get in on a random weekend? What about the bruch? Sunday morning queueing, the Madrid revisitation of Sunday Bloody Sunday by the U2.

Madridiana has the solution for this annoying weekend madness.

The method is: hype cool centric location on Monday or Tuesday, leaving the M30 for peaceful and relaxed locations during the weekend (remember that weekends start on Thursday in Madrid, or better Juernes). 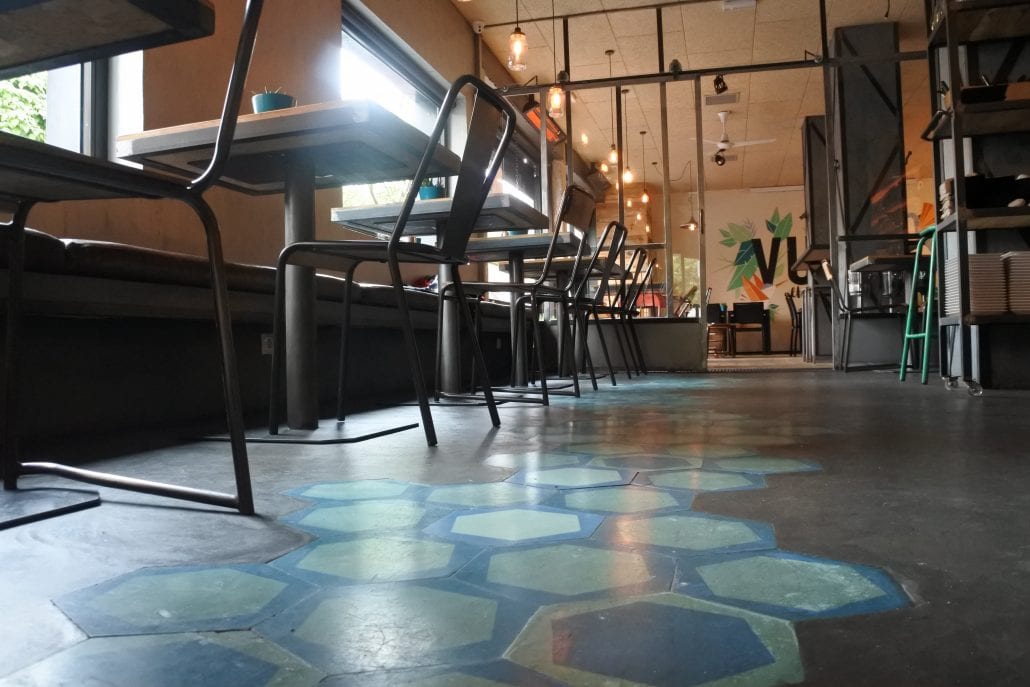 Meraki is a great example of the perfect weekend location.

Lore and Cris, the owners of Meraki restaurant decided to open their first venture in Carabanchel instead of a more centric barrio.

It’s a challenge but most of all it’s an innovative idea and proposal, and when I see innovation I see future and I have to support it.

The name, Meraki, is the first step into this wonderful world, because Meraki comes from the modern Greek and means “do something with passion, with absolute devotion, with undivided attention”, exactly what Lore and Cris transmitted me.

Even if there is a lot of green and blue, cold colours, Meraki it’s really a warm restaurant welcoming clients with a unique atmosphere, also thanks to history of how it was built and which materials have been used like the woods that  comes from the Iglesia de Fuente el Saz del Jarama.

At this point you might have already reserved a table in Meraki for the weekend and I haven’t talked about the food and the barra (which will be explained by Enzo Lauretta, the drinks expert).

And to be totally sincere I haven’t mentioned the first two part of the atmosphere that I guess are the most appreciated, the green walls and the beautiful murals in the terrace.

So let’s start with the core point of a this gastro restaurant: the menu. 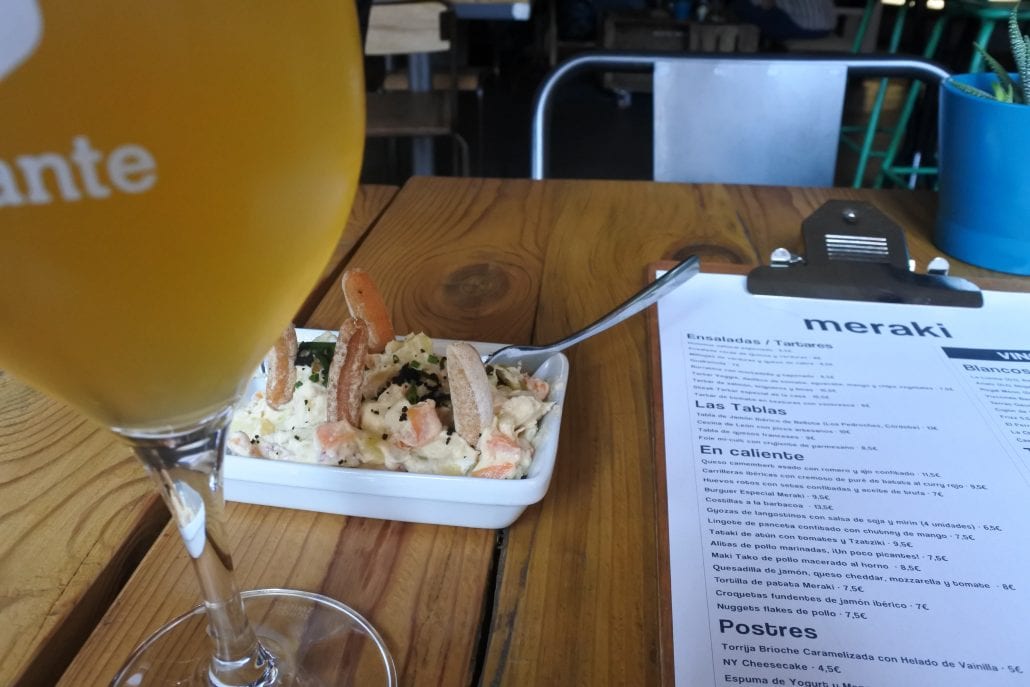 This fantastic ensaladilla rusa is the first bite of Meraki cuisine, as a welcoming tapas.

The starter best seller is the tartar, in the veggie, fishy or classic meat version, it’s really special, and the famous guakamola, which is a sort of avocado tartar, the paradise of avocado lovers. 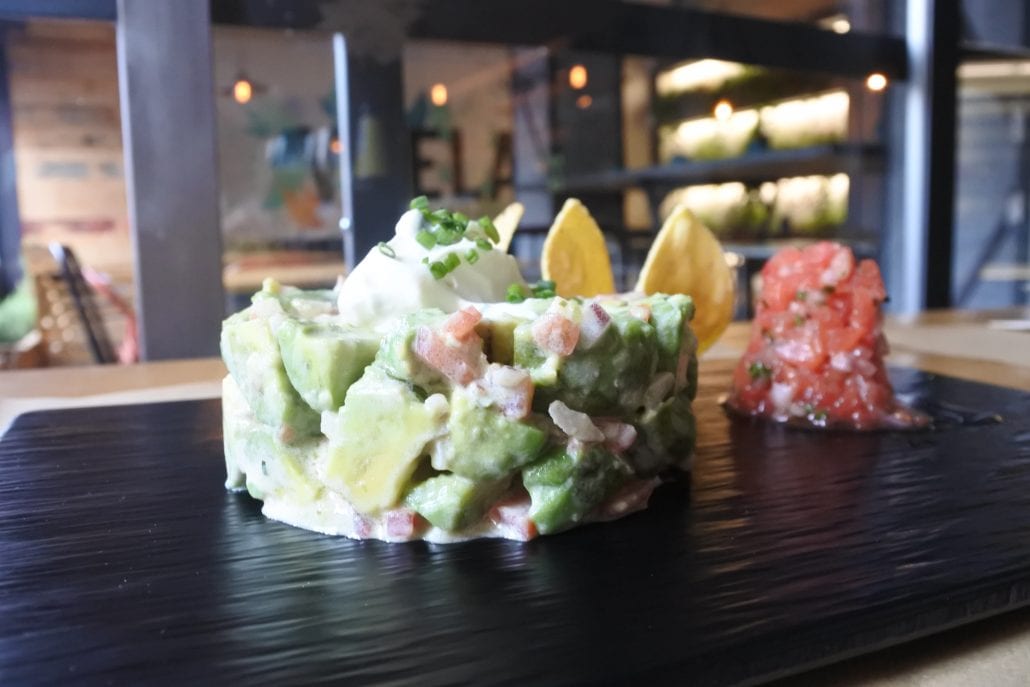 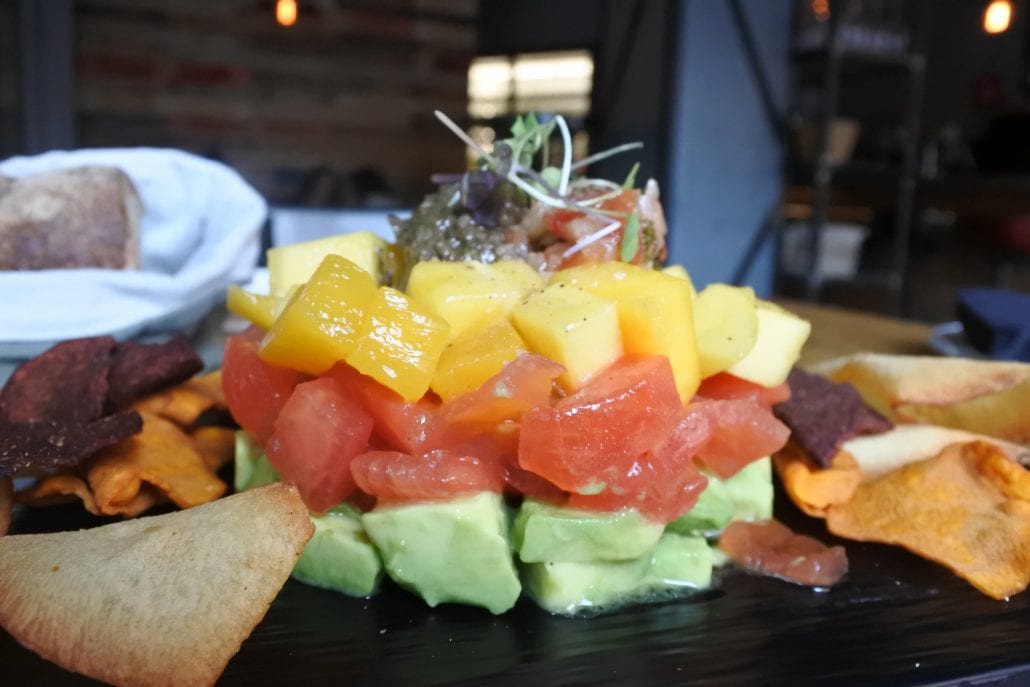 Look at the mango and the tomatoes in the veggie version, no filter picture of course, with my Nikon, it was delicious, I could have two more, even if the portions are huge, and dine with it, as starter, main course and dessert.

Choosing the main courses was not an easy task, the burger with beer bread sounds incredibly tasty, the tuna tataki perfectly matches with the tomatoes tartar, tortilla and croquetas for the classic spanish food with a Meraki touch.

In the end as for the guakamola we went for the funny naming, with the Maki taco as a mix of japanese uramaki and mexican taco, and a classic dish de toda la vida, the carrillera de ternera with patatas purea. 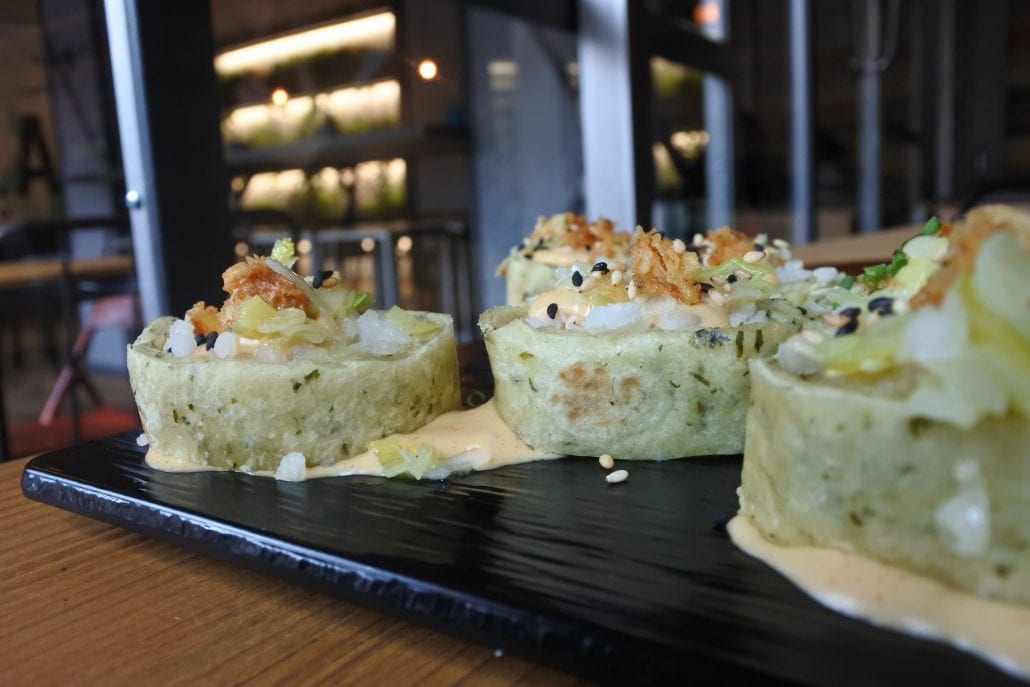 Like a happy kids I was surprised to find my favourite water, San Pellegrino, the best sparkling water in the world.

Not to mention the tablas of quesos and jamon, cecina de Leon, with many starters and main courses made with cheese, Italian with the Burratina and French with the queso Camembert.

So many different cultures in one menu, totally in harmony between each other as a fusion concept should be considering that our tastes are changing every time we travel to a new destination and its culinary tradition and culture.

Creativity is the fil rouge of Meraki, it’s in every mesa, in every sofa, in every dish, that’s why this is not an ordinary restaurant. 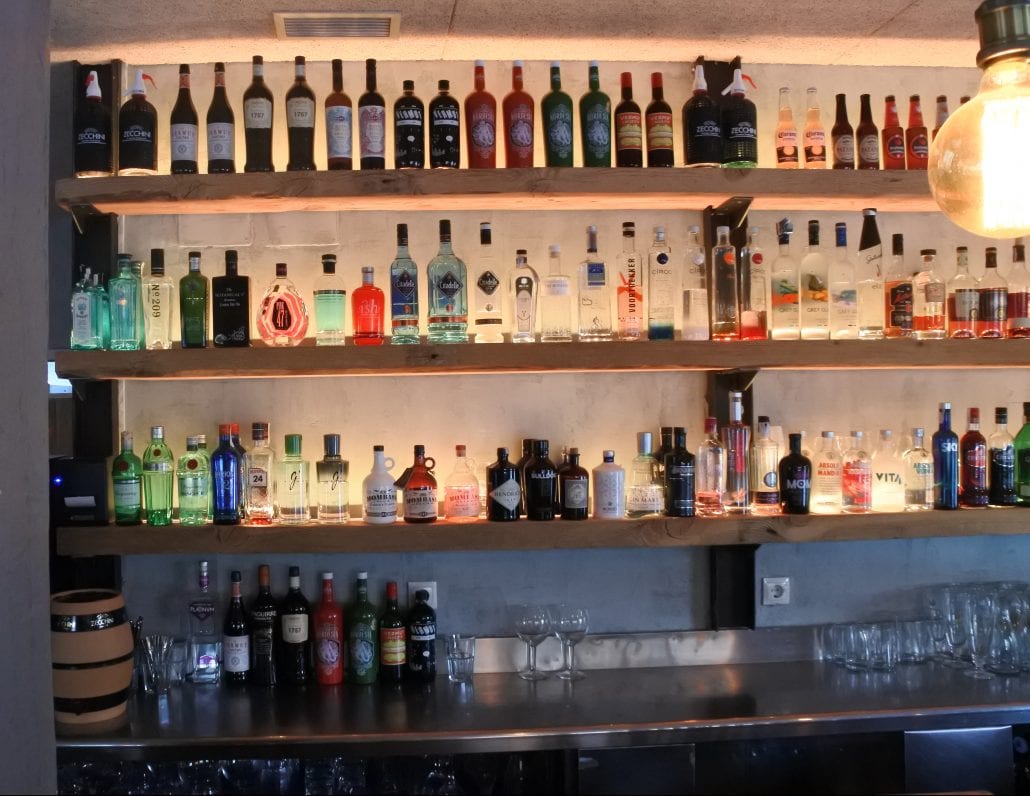 As it was for the San Pellegrino water, the same accurate selection for the coffee with Illy and for a tremendous complete selection of Vermouth, with the Martini Italian version called Riserva Speciale Rubino, Cinzano 1757, then Casa Mariol, the classic Zecchini and much more.

Last but not least we also had what we call a “barra experience” with the bartender Joaquin Poyatos that we already had the chance to meet in occasion of the regional final of the bartending competition Made with Love, in collaboration with the Campari Academy, that put together the best bartenders of Madrid.

Joaquin prepared for us a special cocktail that it will be included in the new menu of the restaurant than we were able to try and preview. 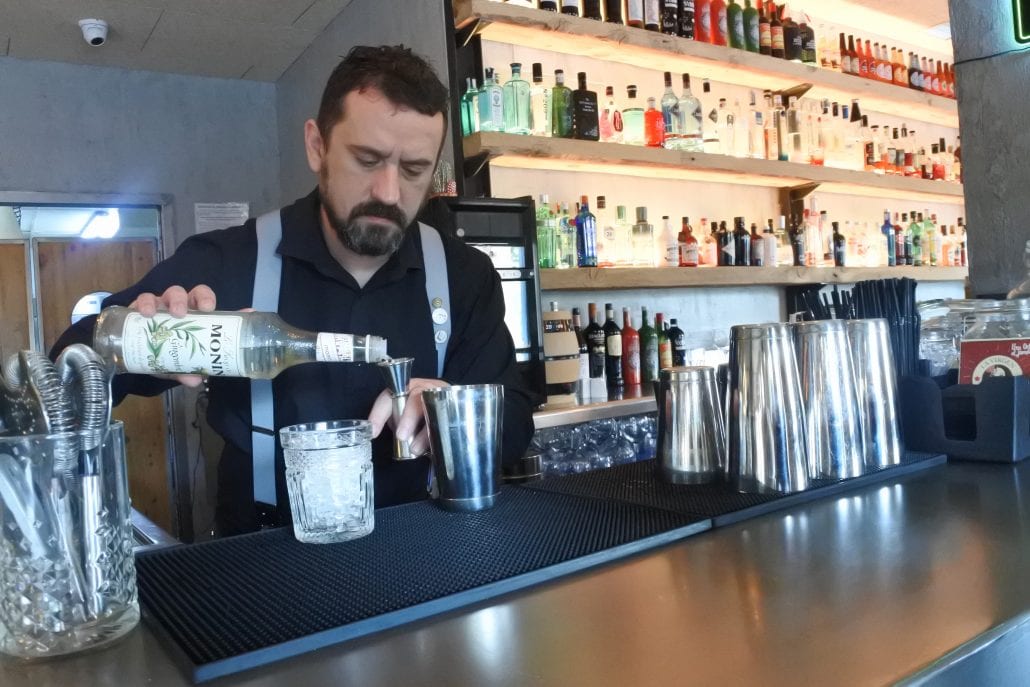 A cocktail made with Spinach, called Popeye, paired with a spinach biscuit that perfectly matches with the cocktail.

His idea of the contamination between the cuisine and the barra, as a liquid exchange of knowledge really fascinated me, and the same it was during the Made in Love event when his creations were aromatized with olives, like if the tapa was inside the cocktail.

Every thursday and saturday there is always live music in Meraki so that know you don’t have any excuse to not trying this unique place.

Wishing all the best to Lore and Cris, we can’t wait to be back to Meraki, convinced that their passion and dedication will be the key for the success and growth of this restaurant, which might be only the first of an amazing series of locals.

Tu Pasta: Italians do it better
Scroll to top