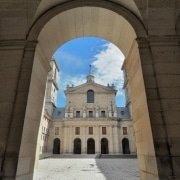 Here we are again writing about the main attractions close to the Spanish сapital. We have already written about Toledo, the city of three cultures and astounding architectural diversity. We began that article by mentioning Escorial and Segovia, that are also a day-trip from Madrid. Incorporating them in the first piece seemed unwise, but we could not just let those places go and leave uncovered. So fasten your seatbelt and be ready for our special tips for these two gateways from Madrid. 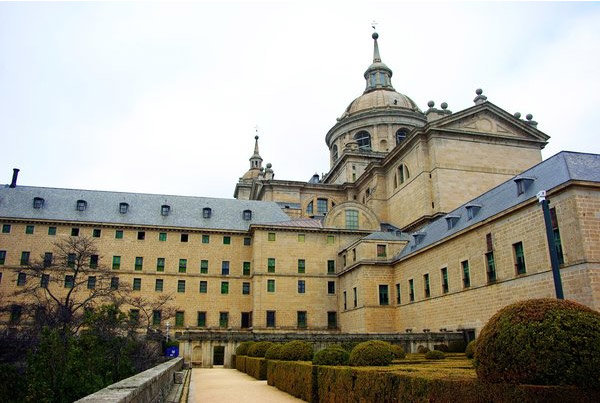 El Escorial is a monastery built by King Philip II as a residence for the Spanish Royal Family to commemorate the 1557 Spanish victory at the Battle of St. Quentin in Picardy against Henry II, king of France. The work began in 1563 and was completed 21 years later. Sadly, the architect Juan Bautista Toledo did not live to see the completion of his project. The monastery is located in San Lorenzo de El Escorial, and it’s more than a monastery, it’s a complex made by a monastery, a pantheon, a library, a basilica and a royal palace of course. It takes half a day to see everything.
You can get here from Madrid in several ways:
There are many offers in Madrid for a day-trip in Escorial for more than 50€ without lunch, or with an incredibly sad boxed lunch. You can find plenty of nice and super affordable places in the historic center of the town. From 1984, the Monastery has been declared a part of the UNESCO Heritage because the austerity of the style of Escorial broke the architectonic trends of the 15th century, and influenced the Spanish architecture of the following centuries.
From the end of the 16th century, it used to be considered the 8th wonder of the world, both for the huge dimensions and for the symbolism. It is dedicated to the sacrifice of San Lorenzo, that’s why there are several corners dedicated to him. First and foremost is the basilica of San Lorenzo el Real, the central building in the El Escorial complex. It was originally designed, like most of the late Gothic cathedrals of western Europe, to take the form of a Latin Cross. And later it was modified by Juan de Herrera to that of a Greek Cross a form with all four arms of equal length. The altar screen (reredos) of the Basilica is 28-meter high, it is three-tiered, highly decorated, made of red granite and jasper and adorned with gilded bronze statuary and three sets of religious paintings commissioned by Philip II.
Now El Escorial is also a museum because of the great collection of sculpture, ancient books and works of art that have been stored in this place for all these centuries. One of the most famous paintings that can be admired inside the monastery is the Tiziano Vecellio crucifixion from 1555. Among all the works of art, the Escorial gardens are a must-see of this venue. They are designed in an Italian way, and are as beautiful as the most charming gardens in other European royal residences. Even if the winter is quite cold, the whole complex doesn’t lose its allure during this season, you will still enjoy it even when visiting on a cloudy or foggy day. There are special celebrations in August during San Lorenzo and San Bernabé, when the Feria Industrial y Artesana de la Sierra de Guadarrama takes place with incredible food and artisan stalls.
El Escorial half-day trip is very often proposed in a combination with Avila. Avila is very close to El Escorial, and is another UNESCO patrimony. It is sometimes called the Town of Stones and Saints, and it claims that it is one of the towns with the highest number of Romanesque and Gothic churches per capita in Spain. It’s a maze of religious buildings, from the most important ones like the cathedral to all the surrounding churches and a monastery. Yet, Avila is not just about the religion, it’s very famous for gastronomy with several signature recipes such as the Avila steak, and for vegetarian the renewed yemas of Santa Teresa, there are sweets made with eggs and sugar.

If you don’t want to waste time of your Escorial visit you should reserve a El Escorial & Valley of the Fallen Half-Day Trip before heading there.

And now it’s time to write about the second protagonist of this article: Segovia 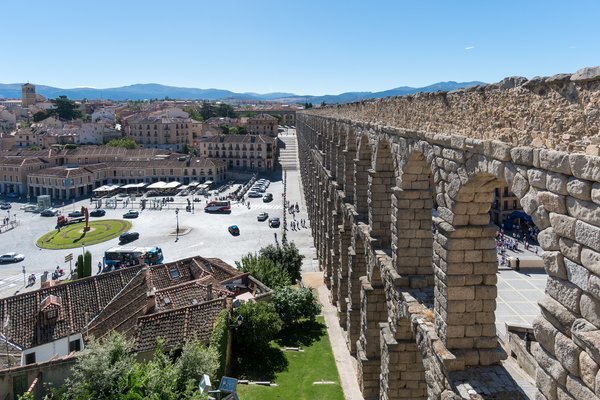 Why is Segovia so famous? As all most famous sights in the world, in order to be recognized and remembered a venue needs to be as much unique as it can. So does Segovia with its landmarks. Located on the plains of Old Castile, Segovia is renowned for a very ancient aqueduct dating from the late 1st or early 2nd century AD.  It is still used to deliver drinking water. “The aqueduct of Segovia is – because of its long span, architectural beauty, uncharacteristic slenderness, and dramatic presence in the center of a dense urban fabric – the most impressive Roman structure in Spain, and one of the most famous among the numerous aqueducts built by the Romans throughout their vast Empire,” Lapunzina wrote. Obviously this is another great patrimony of UNESCO heritage, how could it not be part of it? The position of this city is everything and it’s also crucial for the aqueduct because it is build on a little hill crossed by two important rivers, the Eresma and the Clamores. It’s a Roman city because it has been a very important military center during the Roman Empire.
The Medieval era marks its architectural development, Segovia then became an important industrial center for the textile production. It’s in this period that all the Roman buildings were constructed, they are still preserved to nowadays. Of course the aqueduct is one of those buildings, positioned right at the entrance of the city. A real jewel for its engine, the aqueduct used to carry water from 15 kilometres away. The Cathedral and the Alcazar are the second must-see of this route, and it’s impossible not to visit them because they are the first things you see after the aqueduct.
How to get to Segovia from Madrid?
Official tour-guided trips usually start at the aqueduct, plaza Azoguejo. You should wear the most comfortable shoes, like the ones for hiking, it will take at least two hours to visit this huge place, and the city of full of uphills and uneven pavements. From the entrance of the city the Alcazar is within a walking distance. But get ready to spend lots of energy there because there is a tall tower, climb 152 steps and enjoy a great bird-view from high above. What might be impressive about the Alcazar is again the position and the surroundings. It is a crucial contact point for the Camino di Santiago, with the homonym door from where a special walk starts. After a two-hour discovery of the aqueduct and some arduous exploits at the Alcazar it is time to explore Segovia’s traditional gastronomy. Plaza Azoguejo and Plaza Mayor are probably the perfect places for restaurant hunt. You can sit outside when the sun is rising or setting and eat while watching the architectural beauty of this city. Typical food is the cochinillo which is roasted pork or milk-fed lamb, called lechazo, but there is also a good choice of fish for sea lovers. Trout usually rules the menu. Segovia is a full day trip and it takes time to visit everything. Segovia is a full day trip not also because it takes time to visit everything, but also because waiting for the sunset in the warm Spanish darkness is a great idea, since the illuminated aqueduct is the perfect end of this great route. Even more so that you ponder over it in a good company of Spanish wine and astounding Roman architecture.

If you don’t want to waste time of your Segovia visit you should reserve a Segovia Day Trip before heading to the city and walk around with the best guides.